Introducing our 2021 Electoral Endorsements and Detroit For All Slate! 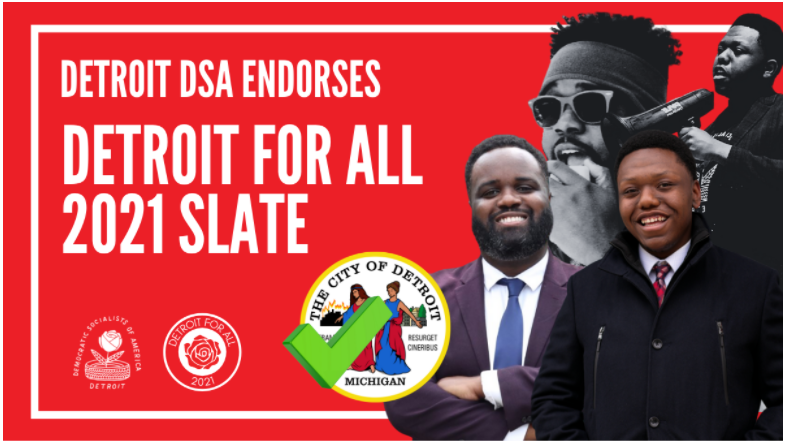 Almost exactly one year ago, Detroit was one of the many cities that participated in the nationwide uprisings in protest of the police murders of Breonna Taylor and George Floyd. In response, the Detroit Police Department made a habit of showing up to protests in head-to-toe military equipment to brutalize not only protestors but random bystanders, members of the press and National Lawyers Guild legal observers as well. Separately, they falsely arrested two Black men based on facial recognition technology mismatches and Detroit City Council approved nearly $2million in funds to expand their mass surveillance apparatus.

In November, suburban Trump supporters attempted to storm TCF Center in order to throw out Detroiters’ votes. Unsurprisingly, the Detroit Police Department led by soon-to-be retired Republican Police Chief James Craig made no serious attempt to stop this from happening.

In April, Detroit City Council passed their annual budget with an increase to the Detroit Police Department budget despite amendment proposals that would have redirected $35million from the police budget to areas of immediate need like healthcare, housing, transportation, and recreation. The budget included a paltry $3million in funding for affordable housing compared to a $328million Detroit Police Department budget.

Now, Republicans are in the midst of a nationwide voter suppression effort to ram bills through state legislatures aimed at restricting ballot access leading into the 2022 elections. The Detroit Police Department continues to brutalize Detroiters and killed a man on the same day as the Derek Chauvin verdict.

Detroit DSA is proud to announce our 2021 electoral endorsements that include two socialist candidates ready to fight back and a ballot initiative that would rewrite the city’s constitution and be a significant first step in addressing the basic needs of working class Detroiters.

We can win power for the working class in Detroit but we need your help.

Volunteer to support the Detroit For All slate by signing up here!

Landis Spencer is the co-chair of our Black and Brown Alliance branch. He is running because last summer’s uprisings sparked critical conversations about what it means to be safe as Black people in our city and country. Not only does there need to be an immediate end to police brutality in the Blackest city in America, there also needs to be a reckoning with the role the police play in our society and the excessive amount of taxpayer dollars that we allot to them. This is money that could be better spent towards healthcare, public transit, and housing in ways that actually improve public safety for Detroiters.

Landis is running to represent District 6 (southwest Detroit) on Detroit’s civilian police oversight board in order to:

Denzel McCampbell has spent the last decade organizing around access to clean water, paid sick time, equitable development, racial justice, campaign finance reform, and ending partisan redistricting. As a founding member of the Detroit chapter of Black Youth Project 100, Denzel has fought against police brutality, hyper-surveillance, criminalization of our communities, and mass incarceration. He’s committed to fighting for issues rooted in uplifting the community and returning power to the people. As an elected Charter Revision Commissioner, he’s worked hand-in-hand with Detroiters to ensure that we have a city charter that is inclusive, forward-thinking, and one that centers the most vulnerable.

Detroit continues to be singled out by Republicans in Lansing and nationally with racist rhetoric and actions to suppress the votes of Black and brown voters. Denzel is running for Detroit City Clerk in order to fight back by:

In 2018, Detroiters voted to rewrite the 2012 Home Rule Charter. The Home Rule Charter functions as the city’s constitution and dictates how the municipal government will operate. The 2018 Charter Revision Commission, a nine-member elected board that includes Denzel McCampbell, was charged with executing this task by 2021. Charter revisions were proposed by individual Detroiters, elected officials, and advisory councils of constituents and activists.

Approval of this ballot initiative would be a step towards a more equitable Detroit and a more accessible Detroit city government. The basic needs of working class people - water, air, transportation, housing - are acknowledged and protection of these needs is integrated into the document. The People's Charter makes it clear that the decade-long giveaway of the city’s resources and land to corporations and capitalist interests will no longer be tolerated.

Passing the People’s Charter would enshrine:

We need to reach as many voters as possible before the August primary.

Volunteer to support the Detroit For All slate by signing up here!