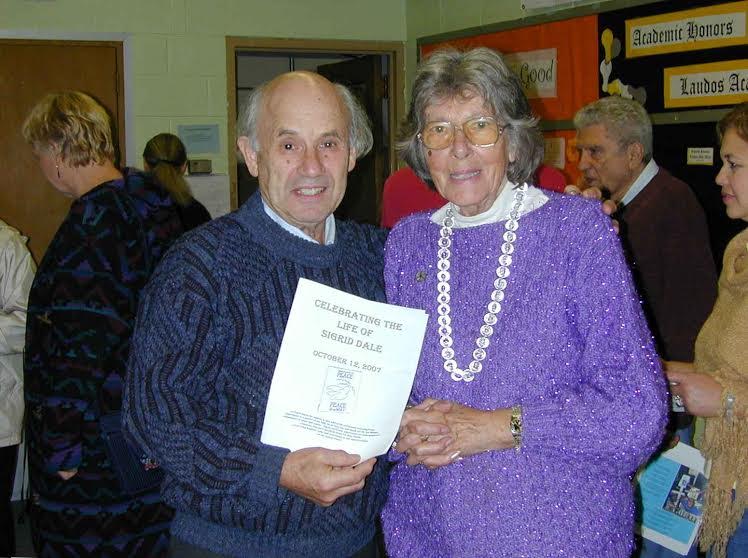 Having tasted the bitter fruit of war and oppression in her native Germany, Sigrid Dale gave her life to the hard work of active peacemaking. As a young child, Sigrid experienced the dual horror of losing her father to Hitler's eugenics program followed by the trauma of living under intense Allied bombing. The reality of war coupled with an innate proclivity for justice informed Sigrid's unwavering commitment to nonviolence for the rest of her life. Knowing deeply the unspeakable cost of war, Sigrid's work for peace was both passionate and pragmatic.

She was an avid reader, a graceful writer, and an intrepid activist who spent her days writing, calling, and lobbying elected officials, attending peace and justice meetings, walking picket lines, organizing buses to Washington, D.C., and watching the Rachel Maddow Show with her beloved partner and fellow peacemaker, "my Ronnie."

She was a longtime supporter of Bernie Sanders, a connoisseur of beauty who delighted in opera and summer roses, and a woman of simple tastes who loved good bread, an occasional glass of chilled white wine, and the daily peace meditations contained in a dog-eared book that she kept on her kitchen table.

After moving to the United States as a young woman, Sigrid's personal experience in tandem with her commitment to Gospel nonviolence, led her to work against the death penalty. Later, she became active in Pax Christi, the Catholic peace and justice organization which itself grew out of the shards of World War II Europe.

In addition to Pax Christi, Sigrid was a member of the Democratic Socialists of America, Peace Action of Michigan, and the Detroit Area Peace with Justice Network. She was a friend (and sometimes foe) of politicians and a partner with working people and the poor. She moved comfortably between soup kitchens and the halls of Congress. Having seen the deadly consequences of nationalism, she viewed herself as a citizen of the world and took "Finlandia" with its plea for peace for their land and for mine as her anthem.

Sigrid's unflinching condemnation of war and nuclear weapons never wavered and took her to sites ranging from Oak Ridge, Tennessee where she protested nuclear weapon production to the West Bank of Palestine as part of Michigan-Meta Peace Team to Austria where she served as a translator for her St. Leo's pastor, Bishop Thomas Gumbleton, at the Beatification of Franz Jagerstatter, the conscientious objector who was jailed and beheaded after refusing to join Hitler's army.

Sigrid herself knew the pinch of handcuffs as the price of peacemaking, having been arrested for civil disobedience a number of times.

A mother of three children, William (Willie), Evelyn (Tess), and Bernard (Bernie), Sigrid's life was driven by the vision of swords being beaten into plowshares so that all children would escape the vagaries of war that she experienced as a child. The urgency that Sigrid brought to peacemaking was borne of heartbreaking experience - the experience of cowering under the thunder of weapons. For Sigrid, and for those of us who call her mentor and friend, the work will continue until that glorious day when children everywhere can grow up without having to know the evil of war.

This is the legacy she leaves us.

Blessed are the peacemakers, chief among them our dear Sigrid. And blessed are we for having shared in her good and faithful life.